On January 3, the United States assassinated Iranian General Qasem Soleimani with a drone strike. He was killed along with Iraqi military leader Abu Mahdi al-Muhandis and eight others near the Baghdad airport in Iraq. Iraqi Prime Minister Adil Abdul-Mahdi has stated that Soleimani was on his way to meet to discuss ways to ease regional tensions.  The leaders of both countries have expressed outrage, and Iran has retaliated. Civilian lives throughout the region are severely threatened by this escalation of violence. and, even as we write these words, we hear this has already begun. We profoundly grieve these lives so terribly lost and send our heartfelt condolences to their loved ones.

Canada must stand for peace.  While Canadian Voice of Women for Peace agrees with the call by Canada’s Foreign Affairs Minister, François-Philippe Champagne, for “all sides to exercise restraint and pursue de-escalation”, we also, however, call on our government to clearly condemn the US airstrikes as a violation of international law. The people of Iraq have already suffered from 17 years of war and US-occupation that has decimated their economy, infrastructure and natural environment. Military escalation also carries with it the danger of the use of nuclear weapons.

Canadian Voice of Women for Peace calls for a complete withdrawal of the US and NATO troops from the region, including a withdrawal of Canadian troops and special forces currently on mission in Iraq. It is imperative that Canada does not join in or support any US or NATO military action against Iran. Canada should immediately end Operation Impact in Iraq and Syria, Operation Artemis in the Persian Gulf, and its NATO training mission in Iraq.

For peace and security in the region, the Government of Canada must have an independent foreign policy from the US, uphold international law, respect human rights and work through the United Nations. Rather than supporting the arms industry and the environmental devastation caused by military aggression, Canada must support diplomatic initiatives toward de-escalation and de-militarization in the region. We call on the Government of Canada to support the restoration of the Iran nuclear deal (JCPOA), which the U.S. withdrew from in 2018, and to support an end to US sanctions harming the people of Iran.

The escalation of violence which may be precipitated by the assassination and retaliations will only add to the incredible devastation, pain and suffering that decades of unwelcome wars have unleashed on so many innocent people throughout the Middle East, decimating their economies, infrastructure, environment, flora and fauna.  And, of upmost significance, these wars have prevented parents from being able to protect and offer a future to their children. If Canada were to truly base our foreign policy on the best interests of all the world’s children, we would choose peace.  And, as Mahatma Gandhi said so wisely, so many years ago, “There is no path to peace. Peace is the path.”

Please tell him you do not want war against Iran. Canadian troops should respect the people of Iraq and get out of their country. You want de-escalation and diplomacy to resolve the conflict and reduce the tensions between the US and Iran.

Office of the Prime Minister

Please tell him you do not want war against Iran. Canadian troops should respect the people of Iraq and get out of their country. You want de-escalation and diplomacy to resolve the conflict and reduce the tensions between the US and Iran.

Letter for the 'Message in the Bottle" project from Joan Smith! How beautiful. Thank you Joan! ... MoreLess
View on Facebook
· Share

What a terrible loss for his family and our community. Robert Devet was truly a grassroots journalist, editor, and publisher. He was a true friend of peace. Nova Scotia Voice of Women for Peace will greatly miss him and his support. ... MoreLess
View on Facebook
· Share

Lost Souls is the song of "silenced children". It highlights the grim reality of what is alleged by the survivors of the Residential School system, and the v...

We will not go to school without our sister! ... MoreLess

HOW WE WON: A Tribute Concert

Friday, September 17th 7PM at the Derby / Marquee Ballroom 2037 Gottingen St. Join us to hear an incredible story of collective action through the weaving of witness telling, music, and spoken word po...
View on Facebook
· Share

We need to know this."All nuclear weapon states explode their bombs on unconsenting nations. No nuclear state tests bombs on its own lands and peoples. Americans don't set off nuclear weapons in Santa Barbara or Washington; they bomb the Western Shoshone Nation." Source: https://culturalsurvival.org/publications/cultural-survival-quarterly/…;Photo: https://sierranevadaally.org/2019/05/…; ... MoreLess 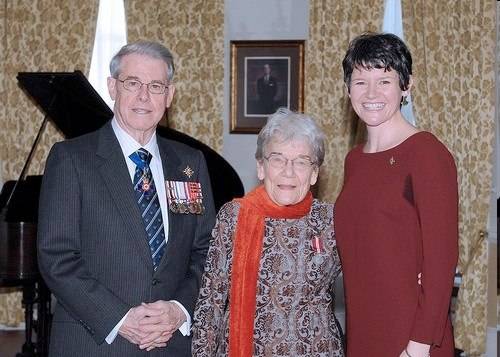 Betty Peterson receiving the Queen's Diamond Jubilee Medal from MP Megan Leslie for her peace work with Voice of Women, and for her work with aboriginal peoples. Betty spent many years working at a grass-roots level with first nations groups to support aboriginal rights.